Why have the FCA taken this action?
The Financial Conduct Authority (FCA) believe that a majority of Business Interruption (BI) policies do not cover pandemics, however, there are some where the policy wordings are not clear. For these limited number of policies, they wish to supply clarity for all parties concerned.

What is a Judicial review?
Judicial review is a type of court proceeding in which a judge reviews the lawfulness of a decision or action made by a public body. In other words, judicial reviews are a challenge to the way in which a decision has been made, rather than the rights and wrongs of the conclusion reached

What has happened so far?
The FCA identified those polices which it believes are in contention and published the list. They have then agreed with key insurers who will act as the defendants for the review. The FCA have presented their argument to the court.

The Insurers have presented their defence, which then allows the FCA to adjust their argument and present this for the hearing. During this process both parties have agreed to hear arguments from other parties, most notable are those who represent the Hiscox Action Group claimants (HAG). 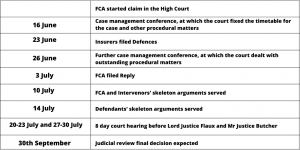 What happens next?
There will be an 8-day court hearing at the end of July, after this the judges will take some time to deliberate and then deliver a verdict.

We do not believe the court will reach a verdict before the end of September.

At Flint Insurance we take every care in ensuring the validity of the information we provide, however, we always suggest that you check the latest updates from official sources such as the FCA as well as seeking out further support from the U.K Government (CBILS) to ensure that you have the latest and most up to date information and resources/support available.

More updates will follow as and when they become available.

Got a question?
Speak to our UK-based experts.